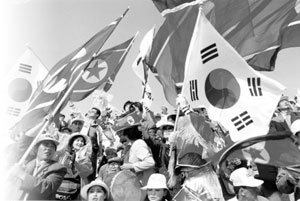 There is sometimes a misconception among non-native speakers of English that different English-speaking nationalities cannot understand each other, that their Englishes are somehow mutually incomprehensible. In the case of Arabic, this can be the case-a speaker of Syrian dialect may find it very difficult to understand an Egyptian using colloquial Arabic, unless they code-switch to classical Arabic (recognised universally as the unchanging standard, since it is the language the Holy Koran is written in). While there is no such standard with English, however, an American has to do no more than say “I don?t understand” to a British, Australian, or South African speaker, and the mutual intelligibility of the language ensures that understandable explanations will be forthcoming. Nevertheless, there are differences. In the article below about North Korean football, an American house-style has been used; here, we use this as a means to examine some differences between North American and British English.

North Korea and Saudi Arabia played their final qualifiera for next year?s World Cupb at King Fahd International Stadium in Riyadh on June 17. The game remained scoreless after 90 minutes of regulation and five minutes of injury time.

The draw gave the North its first ticket to soccer?s grand event since 1966, and its jubilant players embraced each other to share their joy. Striker Jong Tae Se, who plays for the Japanese pro team Kawasaki, burst into tears after taking off his jersey. Coach Kim Jong Hoon also burst into tears.

North Korea and Saudi Arabia each had three wins, three draws and two losses for 12 points in Asia?s Group Bc, but goal difference secured second place in the group for the North and a berth in South Africa next year.

North Korea will play in its second World Cup after shocking the world with a quarterfinal advance in the 1966 tournament in England. Hence, both Koreas will play in the same World Cup finals for the first time.

North Korea has had a bumpy ride in the World Cup over the past 44 years. The Stalinist country had the best team in Asia in the 1950s and 60s. At that time, South Korea even boycotted a World Cup qualifier due to the heavy burden of playing its northern foe. In the 1966 World Cup, Pak Do Ik?s goal gave the North a shocking 1-0 upset of Italy and a berth in the quarterfinals.

That, however, would mark the end of the North?s soccer heyday. The country struggled throughout the 1970s and 80s due to its policy of isolation and economic hardship, snubbing qualifiers for the 1970 and 1978 tournaments. The North even failed to pass the first round of qualifiers for the 1974 and 1986 events. It was stopped in the final round of qualifiers for the 1982 Spain World Cup. North Korea advanced to the final qualifying round for the 1990 and 1994 tournaments, but finished bottom. It also missed the 1998 and 2002 editions. The country tried for the 2006 World Cup in Germany for the first time in 12 years, but finished with just one win and five losses in the final qualifying round.