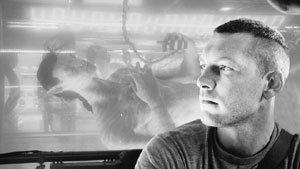 Canadian-born film director James Cameron, notorious as a hard task master and - some might say - perfectionist, hasn′t completed a feature film since ‘Titanic’ in 1997. Now he′s back with ground-breaking technology and a 3D concept for his highly anticipated new project, ‘Avatar’. What took him so long?

Movie director James Cameron appeared at Comic-con International in San Diego July 22. He joined 7,000 people who gathered to see the 24-minute teaser trailer for his new movie “Avatar.” He talked to The Dong-A Ilbo the next day at a hotel. The following are excerpts from the interview.

Dong-A: What did your 12-year hiatus from directing mean to you?

Cameron: I believe the teaser trailer itself can explain what the last 12 years have meant for me. I′ve tried to create sophisticated visual beauty that strikes a chord in the hearts of viewers every second. Some directors believe visual beauty only makes viewers fall asleep, but it is equally interesting for me to create a beautiful image as it is to make a scary scene.

Dong-A: Did you have a fear of failure; given that “Avatar” cost 240 million dollars to make? (His 1989 film “The Abyss” was considered a box office flop despite an investment of 40 million dollars.)

Cameron: I couldn′t sleep at all. I believe “Avatar” is already beyond my control.

Many say “Avatar” marks a huge leap forward in filmmaking technique. Computer graphics are usually added to scenes after the movements of actors are captured by sensors attached all over their bodies. In contrast, computer graphics were directly applied behind the performance of actors during the filming “Avatar.” In other words, they played their roles while looking at the CGI scene in real time. Since they could be emotionally immersed in the scene, Cameron referred to the technique as “emotion” or “performance” capture instead of “motion capture” .

Dong-A: Compared to your directorial debut “The Terminator”, “Avatar” seems to have been easier to make given the technological advances in filmmaking.

Cameron: When I made my first movie, I wondered how I could create an action movie in less than 36 days with four million dollars in Los Angeles . It was truly a gamble. I had more time and money this time, but it wasn′t easy because I had higher expectations and wanted to challenge myself more.

Dong-A: What does it feel like to chart a new path as a director and technician?

Cameron: When I cannot create a visual I want with existing technology, I become frustrated and curse technology. Fortunately, the disparity between imagination and technology in turning imagination into reality is rapidly being narrowed. The problem, surprisingly, is the general lack of imagination amid the rapid decline in technological barriers.

Dong-A: Will the techniques used in “Avatar” have implications in the movie market?

Cameron: When I met George Lucas several years ago, I was convinced that the movie market will usher in an era of 3-D films. If not for the economic crisis, there would have been 10,000 3-D movie theaters worldwide. There are about 3,000 right now, but I heard a plan to open 7,000 new 3-D theaters will be announced November 1. “Titanic” is being recreated in a 3-D version as well.

Dong-A: Finally, if you could control a character, who would that be?

Cameron: That would be me. I can easily imagine myself being happy when walking on Mars or deep down in the sea. You can′t do that in real life, but your imagination comes to life in the world of “Avatar,” just as Jake could walk freely in Pandora though his lower body was paralyzed in real life .