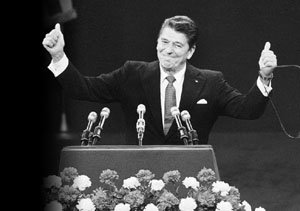 Barack Hussein Obama II is the 44th President of the United States of America: but how much do you know about the others? Most people know that George Washington was the first, but who was the tenth, or the twentieth? Of course those Presidents from the late Twentieth Century are bound to be more familiar to us because of their proximity, but what makes a good leader, and how does history judge such people? What are the criteria? How does history judge who is great and who is not?

Eight Rules for Judging a US President

“There is no single rule for assessing presidential performance.”

Richard Norton Smith of George Mason Universitya , a renowned historian and a scholar of U.S. presidents, said this at the 13th Annual Wharton Leadership Conferenceb.

He suggested eight rules for a more objective assessment of the chief executive, saying opinions of the commander-in-chief “bounce around like corn in a popper”. Smith′s eight rules for judging a president were posted on Forbes.comc.

① A leadership style of doing nothing is more problematic: Think Thomas Jefferson, who purchased the Louisiana territory in 1803 from France; Lyndon B. Johnson, who passed the Civil Rights Act of 1964; Harry Truman, who stopped communist aggression in Korea; and Richard Nixon, who began dialogue with China.

They were risk takers while in office but history rated them highly. The most difficult leadership decision could be to do nothing, however. George H.W. Bush snubbed the historic moment of the collapse of the Berlin Wall in 1989d to avoid angering Russia.

② A president′s power comes from moral authority: Franklin Roosevelt built emotional credibility as he encouraged Americans to overcome the Great Depression in his radio speechese. Ronald Reagan survived an assassination attempt and underwent surgery in 1981f. He reassured Americans when he jokingly said, “Honey, I forgot to duck”.

③ A great president has a “great enemy”: Franklin Roosevelt had Benito Mussolini of Italy and Adolf Hitler of Germany, while Reagan had what he called the “evil empire” in the Soviet Union. These fights against their enemies made people believe they were proud warriors defending their people′s freedom.

④ A great president should have an air of mythology: Reagan′s national security adviser Robert McFarlane said, “He knows so little and accomplishes so much”. In other words, Reagan personified the principle that great leaders are essentially “mysterious figures.”

⑤ Popularity is not legacy: The beloved Warren G. Harding turned into one of the most maligned U.S. presidents after scandals broke out after his deathg. Criticism increased and newly discovered facts showed that he lacked ability in the course of becoming president and lacked quality as president. Harding, however, won his battles and helped bring stability after World War Ｉ.

⑥ Don′t judge a president by today′s standards: Modern scholars undervalue Andrew Jackson, who expanded voting rights from certain white people with land to all white people, but say he paid little attention to women and blacks. For a correct assessment of a president, the thoughts of the people and conventions of the times should be considered.

⑦ Accepting “unintended consequences”: Woodrow Wilson wanted to become the father of a “new freedom” emphasizing smaller national government, but failed in the wake of World War I. His vision was overtaken by unexpected events.

⑧ Even a weak president has a legacy: History generally is kind to strong presidents. Yet Calvin Coolidge, who was considered indecisive, should be reassessed in that he protected taxpayers and refrained from expanding the government.